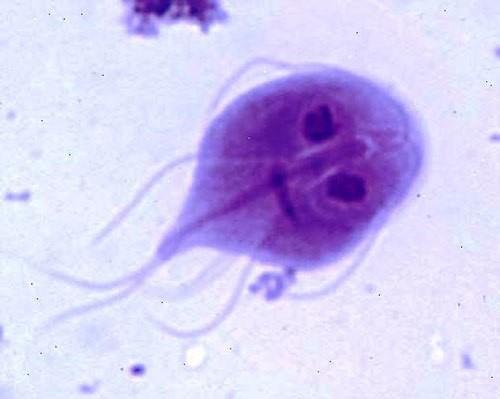 An anerobic flagellated protozoan parasite that survives by colonizing the small intestine of several vertebrates, Giardia lamblia is known to infect humans.

It was first described by von Leeuwenhoek in 1681, when he examined his own stool sample under a microscope, but it was not recognized as a pathogenic organism until the 1970’s.

Other Giardia species infect other mammals including, dogs, cats, cattle, sheep, goats, pigs, beavers, coyotes, rodents and raccoons.  With the vast array of mammalian species infected with Giardiasis there is always a reservoir of Giardia in the environment in beavers, dogs, cats and primates. 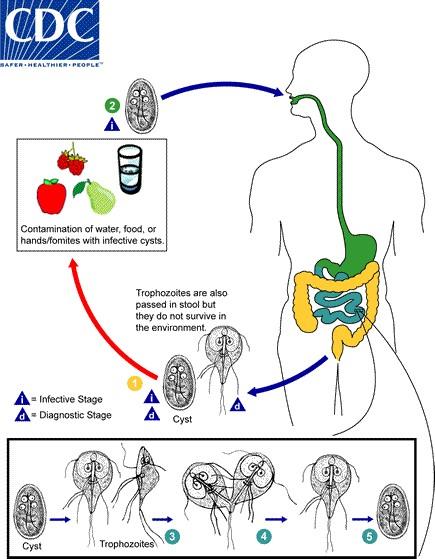 Life Cycle of the parasite Giardia.

The life cycle of the Giardia parasite has two stages: the trophozoite exists freely in the human small intestine, and the cyst is passed into the environment with no intermediate hosts required. The cysts have a thick cell wall that protects them from heat and cold and allows them to survive for long periods in moist environments, and even allows the organism to tolerate chlorine disinfection.  In cold water (4 oC/39.2 oF) Giardia cysts can survive for approximately 7 weeks.  At room temperature (25 oC/ 70 oF) Giardia cysts can survive for approximately 1 week. When the cyst is ingested by the host, trophozoites are released into the gastrointestinal tract where they multiply by binary fission, actively feeding and multiplying throughout the digestive system.  The trophozoites turn into cysts as they near the colon where they are released into the environment in the host’s feces and transmitted to another host.

Giardiasis is very contagious.  Ingestion of more than 25 cysts results in 100% infection rate, with as few as 10 cysts capable of transmitting Giardia.  Individuals become infected after contact with contaminated foods, soil or water that has been in contact with feces carrying Giardia. Importantly, day care center staff and children are prone to infections through contact with soiled diapers and improper cleaning procedures. Person – to – person contact is the #1 method of transmission. Travelers to areas of the world with poor sanitation are at a higher risk of infection.  Water borne transmission is the second highest method of Giardiasis infection in the United States, following ingestion of unfiltered surface water, such as rivers, streams, ponds and lakes.

Up to 60% of infected people are asymptomatic. Symptoms usually occur one to three weeks after exposure. Among the symptoms are watery diarrhea, abdominal cramping, bloating, nausea with or without vomiting, gas, floating or unusually smelly stools, weight loss, low grade fever and loss of appetite. Symptoms may be slow in manifesting as Giardia multiply in your digestive system making gradual changes in the lining to you intestine.

Upon examination a medical professional will ask if you have been in contact with contaminated water while camping or hiking or if your home is supplied by well water.  Also, if the patient is a child in day care, the physician may explore whether the child may have been exposed to unhygienic conditions such as other children’s feces or diarrhea. Stool samples are taken for analysis to determine if Giardia is present. Staining methods may be employed to differentiate features within the stool samples by tinting them in contrasting colors.  Microscopic examination of samples may also be performed but Giardia’s trophozoites-to-cysts life cycle makes a single microscopic examination unreliable; for this reason, it is recommended that multiple microscopic examinations be conducted over a period of approximately a week. 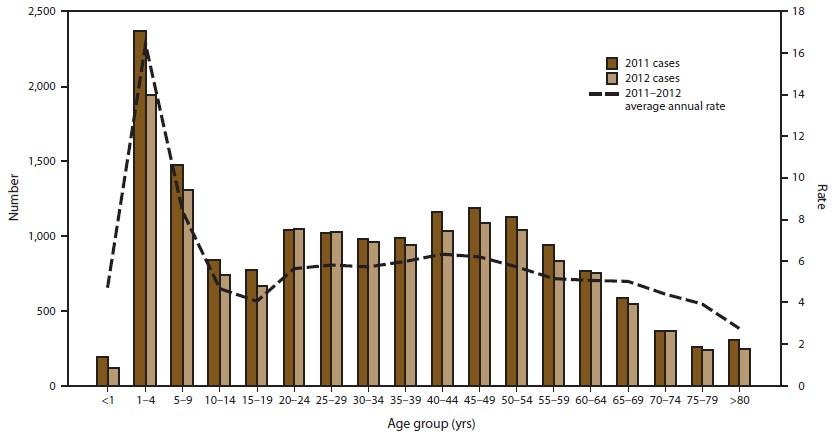 Outbreaks in the United States usually involve small water systems using untreated or inadequately treated surface water.  Giardia is endemic to the western mountain ranges, the Rocky Mountains, Sierra Nevada, and the Cascades. Infection is most common July through October.  Though Giardia infects people of all ages, children age 1 to 4 years old have the highest infection rate and adults 20 to 55 years old the second highest incidence of infection.

Giardia removal in wastewater treatment facilities and in constructed wetlands.

Beginning in 1989, the University of Arizona working with the Pima County Wastewater Management Department developed the Constructed Ecosystem Research Facility (CERF).  One of the primary objectives of CERF was to design research projects to determine the feasibility of aquatic wastewater treatment in Tucson’s arid environment.  In an effort to understand at what concentrations do constructed wetlands remove pathogens from the water column from 1994 – 1996 Gerba et al.(1999), utilized 3 different treatment wetlands, 1) a pond with duckweed, 2) a pond with multispecies subsurface flow (SSF) and 3) a multispecies surface flow (SF). The duckweed pond had a detention time of 6 days and both the SF and SSF treatment wetlands had 4-day retention time.  The treatment pond with duckweed demonstrated the highest removal of Giardia with 98% reduction of cysts, SSF was 88% reduction and SF was the lowest 73% reduction.  Gerber concluded due to the physical size of the Giardia cyst sedimentation is likely the mechanism of removal.

At CERF in 1998, Karim et al. (2004) measured both Giardia cysts in the water column and sediment in two separate ponds with 1)Hyacinth and 2)duckweed.  Viable Giardia survived best in the water column and least within the sediment.  The die-off rate of Giardia in water and sediment were 0.029 log10/day and 0.37 log10/day, respectively.  Overall, the concentration of Giardia in the sediment was 2-3 orders of magnitude greater in both wetlands of Hyacinth and duckweed.  The overwhelming number of Giardia cysts enumerated in the sediment demonstrated physical settling as the main method of removal in constructed wetlands.  Other possible mechanisms of Giardia removal are solar irradiation, predation and in association with biofilms, Reinoso et al., 2008.